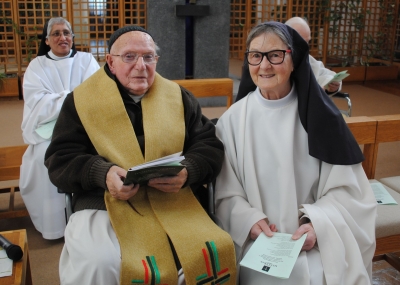 On Saturday 10 February the community joined with the family and friends of Fr Bonaventure to mark the 70th anniversary of his Ordination to the Priesthood. Central to the afternoon of remembrance was the celebration of a Mass of Thanksgiving for the long life of Fr Bonaventure and his service to God and the Cistercian Community.

Fr Bonaventure Cumiskey was born in Kells, Co Meath in 1922 and entered Mount Melleray Abbey in 1941. He was ordained to the priesthood on 15 February 1948. Welcoming the congregation of family and friends of Fr Bonaventure the abbot noted that it is not often that we get to celebrate the seventieth anniversary of priesthood “and so it is a great honour to be here today at such a significant celebration.”

During the homily the abbot said that throughout his seventy years as a priest, Fr Bonaventure had ministered in many different and varied aspects of the life of the community, notably in the College and as chaplain to the nuns at Glencairn. The abbot also commended him for his ministry in the confessional through which he has helped many people and also for the important role he has played within his family. Finally, the abbot pointed out the important ministry that Fr Bonaventure now exercises among the staff and residents of the Padre Pio Rest Home in Cappoquin.

At the conclusion of the Mass, Fr Bonaventure thanked Abbot Richard for celebrating the Mass and for facilitating all who had come to join in the celebration. “Finally, Deo Gratias to the Heavenly Father who has enabled me to live seventy years as a priest. The Mass is at the centre of our religion and, apart from a few omissions due to illness, over the seventy years I have celebrated twenty-five thousand, five hundred and fifty masses.”